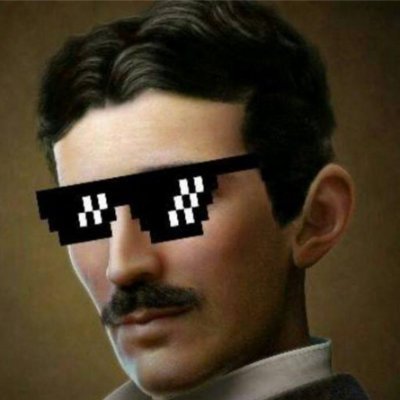 This article answers the following question: How likely is it that a given Ethereum staking pool controlling p of the stake proposes k consecutive blocks within an epoch.

After The Merge (transition from Proof of Work to Proof of Stake ), this is of paramount importance since it opens up a new dimension for Maximal Extractable Value[1].

To begin with, these probabilities are analytically modeled and then validated through Montecarlo simulations. To conclude, on-chain data is used to study n-consecutive block proposals for Coinbase, a well-known entity in the Ethereum consensus layer.

Ethereum is a byzantine fault tolerant[2] public distributed database (a.k.a. blockchain) that is made out of thousands of nodes storing its information, making it one of the most resilient systems invented so far. Technically, it can store arbitrary information but the main use case in the last few years has been related to finance, where the blockchain is used as a ledger, storing account balances.

Miners (or validators, as they will be called after September 2022 once Ethereum migrates from Proof of Work to Proof of Stake) are responsible for updating the database, taking turns at a constant peace of 12 seconds, creating new blocks aggregating multiple valid transactions and appending them to the blockchain. They collect a fee in return, which incentivizes them to behave properly and include as many transactions as possible.

Needless to say, miners/validators have not only a great responsibility in the network, but a lot of power as well, since ultimately they are the ones modifying the distributed ledger. This ability to modify it can be (and is) leveraged by them to extract monetary value, the so-called MEV.

However, the soon-to-happen transition from Proof of Work to Proof of Stake, will introduce new ways of extracting MEV, like multi-block MEV, where a given entity controlling p share of the network stake will propose k consecutive blocks with a given probability. This article models these probabilities both analytically and empirically.

Before diving into the modeling, you may ask. Why isn’t multiblock MEV possible in PoW but is in PoS? Well, it’s because of the algorithm that selects who proposes the next block. Let’s see the differences:

The key here is that RANDAO is updated just once per epoch (32 slots of 12 seconds) so in PoS anyone can know who is going to propose the next 32 blocks. Knowing this allows for multi-block MEV, something that is not possible in PoW.

MEV stands for Maximal Extractable Value. It refers to the value that can be extracted by including, excluding, or changing the order of the transactions within a block. Since the miners/validators are the ones creating the blocks and appending them to the ledger, they have this power. Note that changing the order or excluding transactions in the block they propose is not against the protocol rules, so MEV can be extracted without acting maliciously (ethics aside). Some ways of MEV:

At the time of writing, Ethereum’s consensus layer is made out of more than 415.000[4] validators. In each slot (every 12 seconds) a validator is randomly chosen to propose the block in that slot. An epoch contains 32 slots, so a given validator “rolls the dice” 32 times per epoch to propose a block.

With that high number of validators, you may think that it won’t be very likely that a validator proposes more than one block per epoch, and even less likely that it proposes multiple blocks in a row, which is what we are studying in this post.

However, not all validators belong to completely uncorrelated entities. Some pools or operators control several hundred or even thousands of validators, so we must calculate the probabilities on a pool/operator level, not on a validator level. A pool controlling 10% of the stake, or 40k+ validators, the probability that it proposes 2 or even 3 blocks in a row is not neglectable. This is exactly what we are quantifying.

Hereunder we model analytically the probability of a pool proposing k blocks in a row within an epoch controlling p of the total validators.

However, as we have explained, some entities control several thousands of validators. Let v be the number of validators that a given pool controls, we can calculate the probability of a given pool proposing a block in a slot as:

But we are interested in the probability of the pool proposing k consecutive blocks in a whole epoch, which is not trivial.

If we didn’t care that the blocks were consecutive, we could use the following expression to calculate the probability of getting exactly k successes in n independent trials with p probability of success. But it’s not what we want.

Leaving Ethereum particularities aside, we can model this problem as the chances of getting k consecutive heads when flipping a biased coin n=32 times with a probability of a head of p.

For the sake of simplicity, let’s imagine that we want to study the probability of having k=2 (two consecutive heads HH) in n=3 (three trials). In this case, there are only $ 2^3 = 8 $ different outcomes, where 3 contains our HH sequence (success) and 5 doesn’t.

This simplification with 3 realizations instead of 32 gave us an intuition of the problem but in our case, we have $ 2^{32} = 4,294,967,296 $ individual probabilities and adding all the success cases is not something we can do manually.

Luckily, this post[6] noticed that the number of successes for having at least k consecutive heads in n trials for an unbiased coin p=0.5 can be calculated as:

For example, the probability[7] of getting at least 7 runs with heads using an unbiased coin in 100 coin flips, would be:

However, we can’t use this since:

Luckily, Feller came up with an approximation[8] that allows us to calculate the probability of no success:

We can write this expression in Python solving for x and then for q_n. With this, we get that the probability of a pool controlling 30% of all validators p=0.3 proposing 2 consecutive blocks k=2 in an epoch is 90.71 %.

In order to validate that our analytical probabilities are correct, we run a Monte Carlo simulation. By repeated random sampling (simulating hundreds of thousands of epochs) we can calculate the probabilities of each event empirically, and then compare it against the analytical results.

With a simple Python script, we can estimate the probability of a pool controlling 30% of the stake p=0.3 proposing at least 2 blocks in a row r=2, which is 90.865 %, a number quite close to the analytical one.

Montecarlo probabilities in % (with 100000 runs per tuple)

As we can see, both the empirical and analytical results match, so we can validate that our simulations are correct. We can also see that for a pool controlling >10% of the total validators, the probability of proposing 2, 3 or even 4 blocks is not neglectable.

Note that one epoch has a duration of 12*32 seconds so there are:

So we can calculate the number of k consecutive blocks per day/month that a pool controlling p share of the network will propose. We just need to multiply the probability by 225 for the former or 6750 for the latter.

So a pool/operator controlling 10% of the total validators p=0.1 will propose 4 blocks in a row k=4 with a chance of 0.258% (see table). If we extrapolate to day/month, these are the number of blocks on average that will be proposed.

Once the theory behind is clear, we can apply it to reality. To do so, we just need to know p (% of validators that a given entity controls). However, it’s not trivial to estimate this number.

All validators that the Ethereum network contains, are the result of depositing 32 Eth to the Ethereum deposit contract[9], meaning that every single validator of the 420000+ has done this deposit, with a receipt we can find onchain.

If an entity has done multiple deposits, we can label all validators they control, so we will know who may benefit from the multi-block MEV studied in this post.

The following table shows the k consecutive blocks that each pool/operator will propose per month. It can be generated with this code[10] and the percentages are taken crossing data from ethereumpools.info[11], rated.network[12], beaconcha.in[4] and etherscan.io[13].

For example, assuming that Coinbase controls 14.68% of all validators, it’s expected that they will propose 5 blocks in a row 11 times a month.

Disclaimer: These percentages represent just an estimation crossing data from multiple sources and with on-chain analytics. Some operators like Lido Blockscape publicly recognize their validators, but it’s not always the case. Some % may be wrong.

Along the post, we have calculated the probabilities of proposing k blocks in a row for a pool/operator controlling p of all validators. But, can we empirically verify in the beacon chain that our numbers match?

Note that this analysis is done ex post, meaning that we have taken the blocks that Coinbase proposed, not the ones they should have proposed (aka duties).

For traceability, we used this query[14] in Dune[15] to get the validators[16] that we estimate Coinbase controls. The query scans all deposits looking for a recurrent pattern that is believed to identify Coinbase validators. 32ish Eth are moved to new address, then the deposit is performed and the leftovers are sent back to a Coinbase Misc[17].

In September 2022, we detected a total of 62351 deposited validators with this method.

Filtering all blocks proposed by these 62351 valiators, we get that the following blocks[18] were proposed by Coinbase. 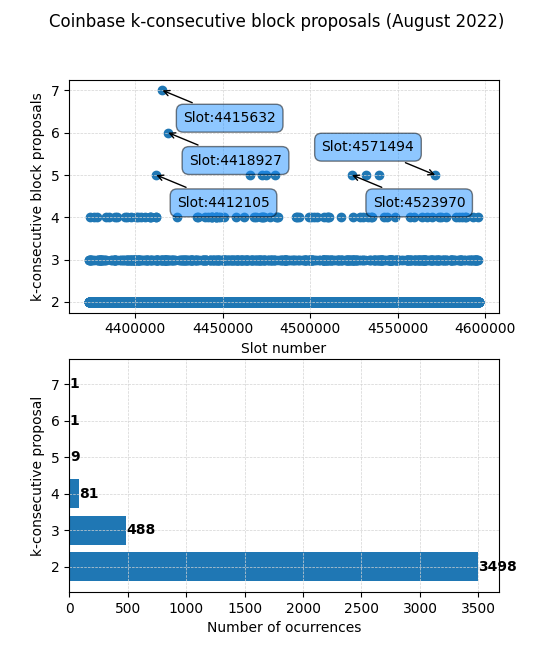 Now that we have the empirical data, we can compare it with the Montecarlo simulations and analytical results from the previous section. We can observe some minor differences, that may be due to a lack of enough realizations, and should converge to the theoretical results when we increase the timespan, i.e. 6 or 12 months.